IFOAM: new elections at the general assembly in India 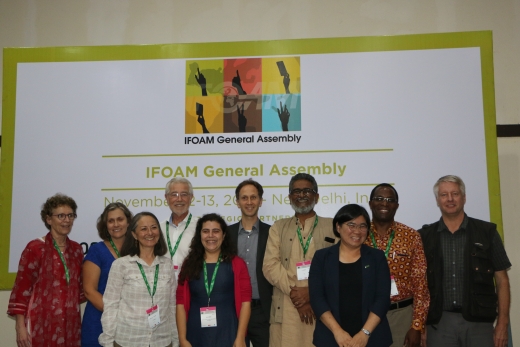 
On the 12th and 13th November 2017, subsequent to the Organic World Congress (OWC) in India, the members of IFOAM – Organics International gathered at their triannual general assembly. As we recently have announced, a new president as well as a new World Board for next three years have been elected at the meeting. The Executive Board, led by the new president Peggy Miars, who is succeeding the former president Andre Leu, will be supported by the new vice-presidents Jennifer Chang and Frank Eyhorn.

The general assembly is the highest organ of IFOAM – Organics International and gathers every three years within the frame of the Organic World Congress. The meeting aims at inspiring the members, the board as well as the staff to constantly work towards the vision of being an important voice for the international organic movement. The next IFOAM general assembly is going to take place in 2020 at the 20th Organic World Congress in Rennes, France.
Website resource: http://organic-market.info/news-in-brief-and-reports-article/ifoam-new-elections-at-the-general-assembly-in-india.html